With a background in Fine Arts (he graduated from the Ecole Supérieure des Beaux Arts of Le Mans in 1996), Nicolas Hubert also used to be a percussionist in a rock band. Whilst on stage, he was discovered by the choreographer Marie Lenfant, who introduced him to contemporary dance and integrated him into her company, where he participated in seven productions from 1996 to 2002. At the same time, he studied contemporary and classical dance, contact-improvisation, instant composition and martial arts (aikido, capoeira) with many different teachers.

He went on to dance with several companies in both France and abroad, including Hervé Robbe / Centre Chorégraphique National du Havre, Cie Michèle Noiret (in collaboration with the Percussions de Strasbourg, for the production Les Arpenteurs), Cie Linga, Cie Pascoli, Cie Hervé Koubi… He also participated in improvisation performances as part of the Container project (2003 à 2009), created by the non-profit organization Transition (Patricia Kuypers & Franck Beaubois).

After his first solo appearance in 2000 (Le fond de l’air effraie...), he founded the Compagnie épiderme in 2002. Each one of his production creates a link between the choreographic writing and a specific scenographic universe : the physical dimension of the dance is intertwined with the plastic dimension of the scenography. The dance is also directly connected to the music trough the original scores performed by the musicians on stage. After Ritournelle in 2004, Métaphormose(s) in 2007, Slumberland in 2009, Work in regress (?) in 2011, (re)flux in 2012, he created Circonférence in 2013.

Since 2006, Nicolas Hubert also holds a Diplôme d’Etat as a teacher of contemporary dance, and devotes much of his time to teaching (CND of Lyon, CCN of Grenoble, CCN of Rillieux La Pape.). 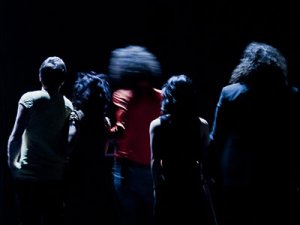 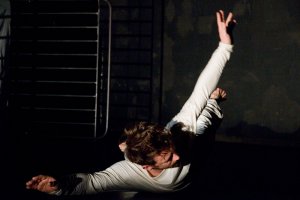